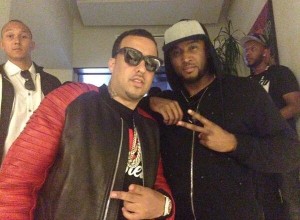 Top Nigerian film/music video director — Sesan Ogunro who has been the mastermind behind most of the hottest music videos in Nigerian has reached another milestone.

Sesan is currently directing the video for one of French Montana’s yet to be released songs in Los Angeles, California.

He shared pictures from the set with French Montana, who is reportedly dating Khloe Kardashian.