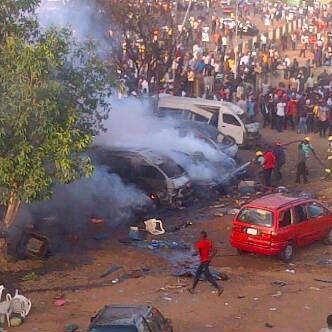 It also warned residents of the area to stay away from the scene of the explosion.

According to the Senior Information Officer, NEMA, Mr. Sani Datti, “The explosion occurred at 6.30am local time.

“The agency has found it necessary to also warn ordinary citizens to keep off the bomb explosion scene”.

Datti added that Search and Rescue officers as well as other response agencies “are now at the scene and have cordoned off the area.

“Further details and information will be updated soon”.

Meanwhile, the explosion had caused intense apprehension in Nyanya, Mararaba and its environs as many residents are now scared of venturing outside.

A legal practitioner, who spoke with our correspondent over the phone on the condition of anonymity, said: “I am so scared for my life right now and shocked to the marrows; I can’t [even] find the strength to go to work”.

Datti, however, assured that NEMA and other government agencies were working round the clock to cordon off the area in order to douse the already heightened tension.

“Our men are there and we are doing our best to calm issues. I will update you as we go on”, he said.