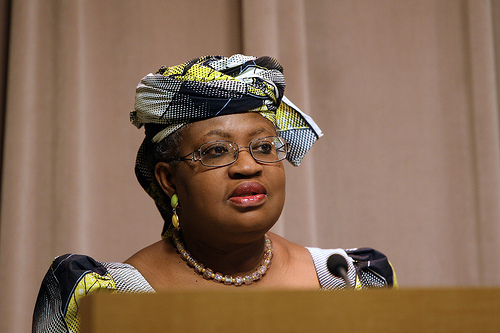 The Minister for Finance, Dr Ngozi Okonjo-Iweala, on Tuesday in Abuja said no fewer than 1.8 million graduates in the country move into the labour market every year.

Okonjo-Iweala, who is also the Coordinating Minister for the Economy, made this known during a meeting with delegates of the Arewa Youth Forum on issues of youth development in the Northern part of the country.

She said that the data was generated by National Bureau of Statistics and that it was to enable the Federal Government to ascertain the level of youth unemployment and come up with policies to address it.

“I am proud to say that after two months of methodological work, the statisticians have come up with the data that 1.8 million people in the country enter the job market yearly.

“I am happy to tell you that last year we were able to create 1.6 million jobs. So we are getting close to the 1.8 million that enter the job market.

“We also have a pool of 5.3 million unemployed graduates that have been accumulating over the years.

“So our strategy is to come up with policies that will cover the number of entrants every year before taking care of the backlog,’’ she said.

The minister said that President Goodluck Jonathan’s administration was doing a lot to create employment opportunities for the youth.

“Through SURE-P, so far we have created 120,000 jobs. While YouWin is geared towards graduates, the SURE-P is for those youths who may not have gone through school or did not complete their education.

“The President has launched the National Mortgage Re-finance Corporation which will not only provide housing for the low income earners but will simultaneously create thousands of jobs for our youth.

“We are targeting 10,000 mortgages this year and for every house you build, you create five direct jobs and two and half indirect jobs, which can create another 75,000 jobs”, she added.

On agriculture, Okonjo-Iweala said that more than 400,000 part time jobs had been created and had become a source of good income for the youth.

She also said that the government was designing a special programme for states in the North-East region, adding that the scheme would focus on education and agriculture.

Earlier, the President of Arewa Youth Forum, Alh Gambo Gujungu, said that the visit to the minister was to deliberate on issues of development in Northern Nigeria with regards to unemployment.

“The Arewa Youth Forum is making this important visit to rub minds with you on issues of national interest, particularly the development of Northern Nigeria as it affects youth unemployment.

“We wish to also discuss the absence of peace and unity that has divided the country, washing away the inherent brotherhood we were known for”, he said.

Gujungu said the association had through the Chief of Staff to the President, presented a paper to the presidency on the issues.

He said that insecurity, marginalisation, underdevelopment, infrastructure decay, and youth unemployment in Northern part of country were some of the issues contained in the paper sent to the presidency.

He said the association had developed a strategic document titled “Restoring the Security of Northern Nigeria through Youth Empowerment” as its contribution to resolving the issues.

The youth president commended the minister and President Jonathan for their “visionary leadership in piloting the economic affairs of the country”.

He noted the roles the duo played in the various empowerment schemes, including YouWin and SURE-P.

He, however, urged them to create a Northern Youth Empowerment Programme (NYEP) and re-double efforts in the existing empowerment schemes to address insecurity and insurgency in the country. (NAN)