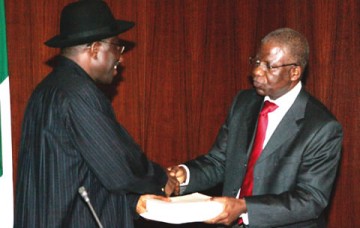 The Federal Government has accepted the recommendation for the scrapping the National Poverty Eradication Programme, NAPEP, and the Fiscal Responsibility Commission, FRC.

This is contained in a Government White Paper on the recommendations of the Presidential Committee on the Restructuring and Rationalisation of Government Parastatals, Commissions and Agencies in Abuja on Monday.

The committee headed by the former Head of Civil Service of the Federation, Stephen Orosanye, had in its report submitted on April 16, 2012, recommended the reduction of federal statutory agencies from 263 to 161.

The Federal Government accepted the scrapping of FRC and directed the Attorney General of the Federation to initiate necessary action for the abolition.

It said their respective enabling laws should be amended accordingly to reflect the merger. It directed that the Revenue Mobilisation, Allocation and Fiscal Commission, RMFAC, should perform the functions of the FRC and the National Salaries, Income and Wages Commission and their enabling law repealed.

It stated that the enabling laws of RMFAC be amended to accommodate the functions of the FRC and the National Salaries, Income and Wages Commission, with the latter to also be scrapped.

The Federal Government also accepted that the enabling law of the Nigerian College of Aviation Technology be amended and the college restructured,

It accepted the stoppage of the practise of certain categories of retirees opting out of contributory pension scheme and directed that only the military may withdraw from the scheme.

The Federal Government accepted the stoppage of the bill for the establishment of NEPAD as an agency of government, contending that there were already laws relating to activities of NEPAD.

The Federal Government accepted the abolition and repealing of the enabling law of the Utilities Charges Commission and the Secretary to the Government of the Federation should initiate the process.

It further accepted that the National Agricultural Insurance Corporation be fully commercialised and the passed bill on the Nigeria Agriculture Quarantine Service should not be assented to by the president.

It accepted that the Veterinary Research Council of Nigeria should as a professional body be self-funding and that further budgetary allocation of the council should cease.

The white paper accepted the partial commercialisation of NIPOST and the sell off its major shares in NIGCOMSAT as well as retention of minority shares in the agency.

It directed that the functions of NIGCOMSAT that relates to space development be reverted to the National Space Development Agency.

The Federal Government accepted that JAMB should continue to exist as the central examination body for admissions into Nigerian universities.

It directed that JAMB must play its regulatory role to ensure that all students for undergraduate admissions into Nigerian universities must pass through JAMB including direct entries.

The white paper accepted the merger of the function of the Nigerian institute for Education Planners and Administrators with those of the National Teachers Institute.

It however rejected the merger of WAEC with NECO and NABTEB.

The Federal Government further accepted that the Nigerian Film Corporation be commercialised from 2013 fiscal year but with government seed funding.

It accepted that all offices of the Nigerian Institute of Advanced Legal Studies outside Lagos and Abuja be closed to ensure judicious use of available resources in line with government policy.

It accepted that the Nigerian Financial Reporting Council ceases to be funded by government from 2015 and that the Industrial Training Fund be self-funding from 2014.

It accepted that the allegation made by the National Boundaries Commission against the office of the Surveyor General of the Federation over the funding of two non-existent boundary demarcation be investigated.

The white paper also rejected the merger of three anti-corruption agencies: the Economic and Financial Crimes Commission, EFCC; the Independent Corrupt Practices and other related offences Commission, ICPC; and the Code of Conduct Bureau, CCB.