Home News Feed “Oscar is a liar, he shot my sister in a fit of...
Facebook
Twitter
WhatsApp 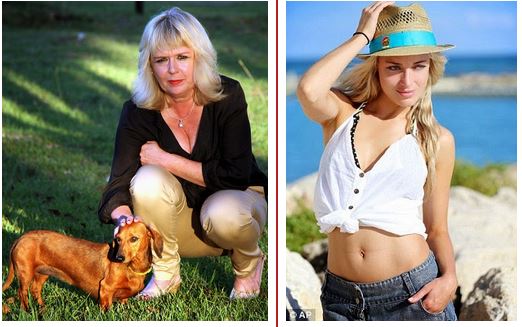 Oscar Pistorius may be trying to convince the world that he shot his girlfriend in his home by mistake but Reeva’s family is not convinced. In fact they are so sure he shot and killed her in a fit of rage during an argument.

In an exclusive interview with UK Daily Mail today, Reeva’s sister Simone (pictured left) says they are in no doubt that Pistorius is a liar.

“He is trying to convince the court that they were really close and that he cared for her. It’s not true. He is a disgusting liar. At the start of the trial, my heart stopped as he walked past, ignoring us. I like to think his heart stopped too. He knew we were there but he almost lost his balance and fell over when he saw us.

‘Then he sat in the dock, smirking. He killed my sister and yet he still seems to be enjoying his celebrity status. During the adjournments he marched around as if he was still a star while my mother and I just wanted to hide away. I don’t understand how anyone could commit that act – kill someone – and behave like that.’ 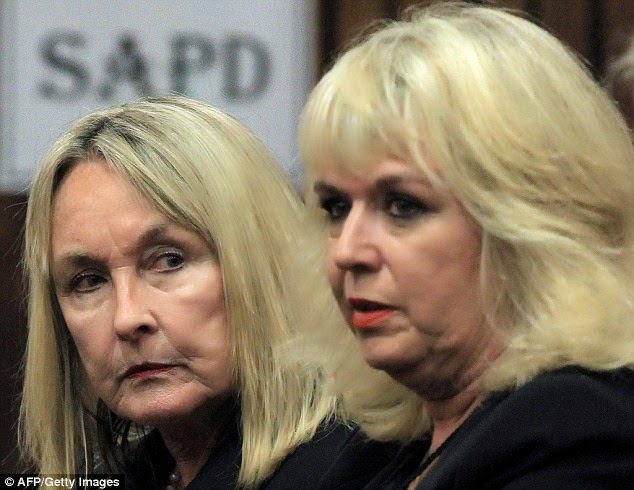 To find an outlet for their feelings, the Steenkamps plan to open a shelter in Reeva’s memory for women who are victims of domestic abuse. But before that, there are  three more weeks of the trial to endure.

Simone, 48, who has given up her career and life in England to live with her parents in South Africa since Reeva’s death, says the whole family tried to offer forgiveness to Pistorius before the trial began, but that her feelings had changed over the past three weeks.

“It has been such an eye-opener for me,’ she says. ‘Until I walked into the courtroom it hadn’t really hit me that Reeva was dead, that I’ll never again see her coming through the door, bouncing around, being in charge of us all like she used to be.

‘Sitting there beside my mother in that formal setting, with the whole proceedings aimed at finding the truth about the night she died, I finally took it in and it almost destroyed me. I couldn’t go there for more than a day.

‘I wouldn’t be able to control my feelings. I would be sobbing, distraught and angry listening to his continuing lies.’

“As the court adjourned for the weekend, the prosecutor Gerrie Nel was in the middle of questioning Pistorius about whether Reeva screamed when he was shooting her. I admire his persistent questioning and he is right to focus on that point,’

“I believe that she was screaming and that he knew it was her he was shooting. I believe they were arguing and that he is an insecure, unpredictable man who might have been thinking he couldn’t live without her if the row ended badly. 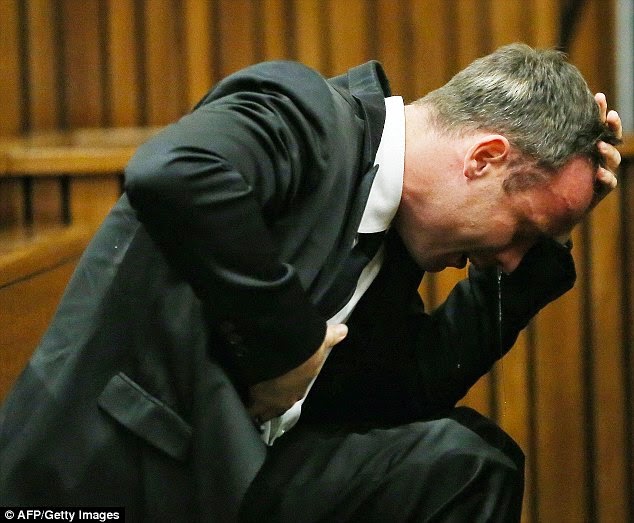 “So he picked up his gun and shot her in a fit of rage, and now he is lying his head off in the witness box, saying that Reeva didn’t scream to let him know she was behind the toilet door. Our Reeva was very vocal, very assertive. Some people might go quiet when something terrible is happening, but not Reeva. She would have screamed. I know she would.

“She was a loving, outgoing girl who always spoke up about her feelings, she didn’t hold back. She had lived her life until then in safety and security and would not have felt panicked into silence.’

“Reeva was beautiful and much-loved. She had had few boyfriends and they remained close even after the romance was over. She didn’t know anything about volatile relationships and fighting. I can’t bear to think of her last moments. It was a terrible shock to see photographs of her head shown to the court.

“And all the time Pistorius is crying and vomiting in front of us. My poor mother somehow has to endure this day after day. She is being so strong while this is breaking her up inside. She feels strongly that she must be there for Reeva.’

Simone says she feels proud of her mother for her calm and dignified presence in the court.

‘If I was there I would only upset her by crying and storming out,’ she says. ‘I could not sit there and listen to him, and sit through all those adjournments because Oscar is tired, Oscar is emotional, Oscar is crying again. Why can’t he end this agony for all of us who loved Reeva, and just tell the truth? That’s all we want, the end of this trial and some closure at last.

We will never really know why he did it, why he destroyed her life and his own. Nothing will ever be the same for his family or ours, we know that. But now we want it to be over. We’ll be so glad when it’s over.’

It was in Johannesburg, on the party scene with modelling and show business friends, that Reeva met Pistorius in November 2012 and became his regular girlfriend.

Advertisement
Simone says her family have been astonished at Pistorius’s claims that he and Reeva were planning to move in together and that he was buying a house and planning to decorate and furnish it with her.

‘She told my mother everything. Why wouldn’t she tell her that?’ she asks. ‘Reeva had only been going out with Pistorius for a short time. Living in England, I didn’t even know she was in a relationship with him – that’s how new it all was.’

Simone had been asleep at her home in a village in the Cambridgeshire countryside on Valentine’s Day morning when she received a phone call from her closest friend in South Africa.

‘It was 6am and I was hearing that my little sister had been shot dead. I just froze, I was dazed. I got up and went outside in my pyjamas, shivering from the cold and the shock,’ she says. A neighbour called to ask if I was all right and I said I didn’t think so. I couldn’t stop shivering, then I phoned my mother and began to realise this terrible nightmare was really true.’

Simone worked for Porsche customer services, and had been living happily in England for 13 years.
She said it took her less than an hour to decide she should come home permanently to South Africa.

‘Our family is close and loving,’ she says. ‘My mother had been divorced and was bringing me up alone when she met and married Barry. He has been my dad ever since. I had a happy childhood on a farm with horses in a country town outside Cape Town.

‘When I was 18 my mother became pregnant with Reeva. She was my adorable baby sister. I loved her from the first moment. My mother ran a riding school and would be outside with the ponies and kids while I looked after Reeva. The second she cried I would pick her up from her cot and it became a joke in the family – I just wanted to hold her all the time, whether she was crying or not.’

As a toddler, Reeva was Simone’s bridesmaid at her wedding. ‘She was perfect, and the photograph of us together is something I cherish now more than ever.’

As Reeva grew up she became close to Simone’s own two children, boys called Nicholas and Christian, now 26 and 27. They are both devastated by her death.

“We don’t want to make a big thing about it,’ says Simone. ‘We just want to get on with it. My sister’s death has been our first experience of domestic violence and we have since learned that four women are killed every day like that in South Africa.

‘We are going to provide help and support in a practical way, give women somewhere safe to run to when they are in danger.’

Simone says that, despite her anger towards Pistorius, she has no bitterness towards his relatives.

‘No one in our family is bitter or vengeful. Our hearts go out to Aimee and Carl, Pistorius’s brother and sister, who sit in court every day.

‘They clearly idolised him and I can see they are falling to bits. They didn’t kill my sister. I feel nothing but sympathy for them.’

She says that Aimee had come over to her and her mother one day to quietly say sorry, and that Carl had hugged her mother outside  the court, saying: ‘I’m so sorry for your loss’.

‘He didn’t do that for the cameras, and no one was there on that rainy day in the street,’ she says. ‘His  family is destroyed just as ours is.’