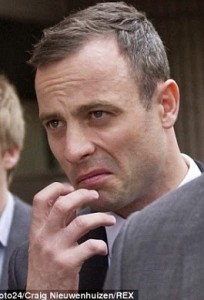 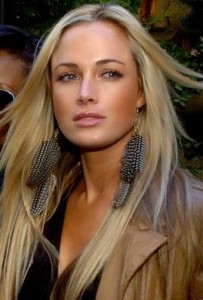 The prosecutor in the Oscar Pistorius murder trial — Gerrie Nel  today tore into the athlete in fierce cross-examination, forcing him to publicly acknowledge that he killed his girlfriend after he said he had made a ‘mistake’ in shooting Reeva Steenkamp.
Gerrie asked Pistorius to say he ‘shot and killed her’, but Pistorius refused, replying merely: ‘I did.’
Mr Gel shouted: ‘You made a mistake? You killed a person, that’s what you did! ‘You shot and killed her, won’t you take responsibility for that?’
Mr Nel later demanded that a close-up image of Miss Steenkamp’s gunshot head wound showing her hair matted with blood be displayed on the court monitors, forcing Pistorius to retch and break down.
Earlier, Pistorius has described how Reeva Steenkamp died in his arms as he made frantic attempts to resuscitate her and stop the bleeding after gunning her down.
He also denied any intention to kill girlfriend Miss Steenkamp or the intruder he believed to be behind the door.