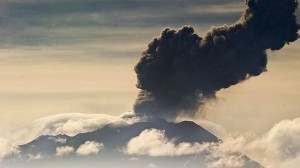 Residents have fled villages near Peru’s Ubinas volcano, which this week began spitting out white-hot chunks of rock, some as big as 30cm in diameter.

The renewed activity led the government to announce a state of emergency in the Andean region of Moquegua, some 1200km south of Lima.

The region is home to some 40 volcanoes, most of which, unlike Ubinas, are dormant.

Officials plan to distribute food, face masks and goggles to help those upwind of the volcano cope with airborne ash.