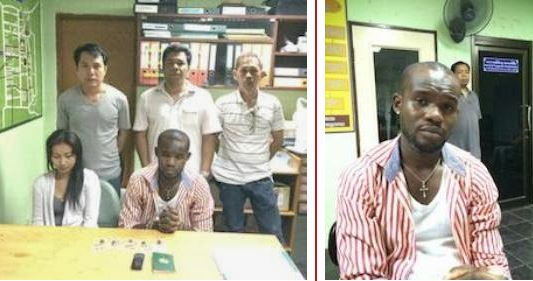 Ibenuba Henry Onyinyechukwu, a Nigerian living in Thailand has been arrested by Thailand police for possession and dealing in illegal drugs, cocaine. Ibenuba, who had been dealing in hard drugs in Thailand for a while, was arrested following a well planned move by the police.

A Thai lady named Somkid Kwanngern was first arrested with 1.2g of cocaine and upon questioning told the police it was her Briton friend, Curtis Martin Taylor, who gave them to her. She took the police to Taylor who confessed to buying the drugs from Ibenuba. The Thai police hatched a secret investigation on Ibenuba using the Thai lady who pretended to be a buyer. She called Ibenuba asking to buy 5.45g of cocaine from him and he asked her to come to his house at KK Apartment to receive it, which she did. After the deal was concluded and fake money provided by the police had been handed over to Ibenuba, she notified the police.