Nigerian President Goodluck Jonathan has today visited the Nyanya bomb blast scene and then headed to Asokoro Hospital to see the victims of the explosion. 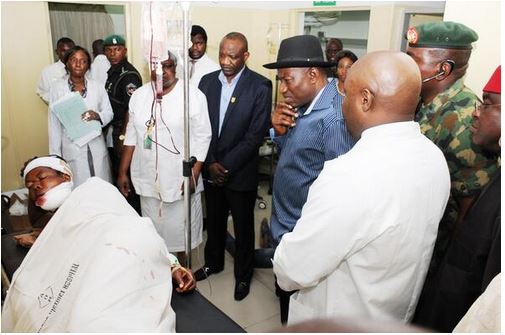 “Though we lost quite a number of people, we condole with our country men and women,” president said.

He also commended the security services ‎for their prompt action.
President Jonathan called on Nigerians to be conscious and observant of possible security threat around them.
He stressed the need for the media and relevant government and private stakeholders to initiate security enlightenment programmes.

“Those countries that face terror, they have developed great awareness. If there are unusual movement of vehicles and bags, they call on security and based on this, a lot of incidences are contained. So we believe that if people will become observant and all of us become security conscious by the movement of people, we will be able to reduce some of these incidences.”

President said that the federal government would continue to work hard to curtail terrorist attacks and activities of the Boko Haram Islamist sect in particular.

An explosion hit the busy commuter bus station around 6.30am when hundreds of people were on going to work.At least 71 people have been killed, while 124 – injured, police has reported.