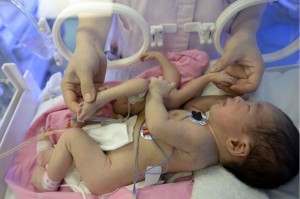 A baby boy born with four legs and four arms has undergone complex surgery to remove the extra limbs.

The 13-day-old boy was born weighing just 3kg at a hospital in southern China on April 2 with four additional arms and legs on the right side of his body.

His conjoined twin failed to fully develop in the womb and the surviving baby was born with his arms and legs.

The child is now in a stable condition at Guangzhou Women and Children’s Medial Center after an operation to remove the limbs.

The baby was born with pneumonia and congenital heart disease and is expected to remain in hospital for some time.

His father, named only as Mr Chen, is reported by the Global Times to have blamed himself for his son’s condition as he had not taken good care of his wife during pregnancy.

He said: “I only cared about my work. I just thought of making money instead of taking her to hospital for a medical checkup.”

Yu Jiaking, chief surgeon at the hospital, said: “They were supposed to be twins, but one had underdeveloped and became deformed.”