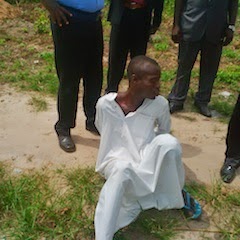 The Ogun State Police Command has arrested a Nigerien, Mamodu Bashir Ibrahim, for having carnal knowledge of a woman and beheading her two-year old infant male child in Owode Egba, Obafemi-Owode Local Government Area of the state.

It was learnt that the suspect trailed the woman, who was carrying her son on her back, into the bush, where she went to relieve herself, forced her into an uncompleted building, raped her, then stabbed her and killed the boy before he severed his head from the rest of his body.

Narrating the events leading to Ibrahim’s eventual arrest, an eye-witness said: “The suspect after raping the woman, stabbed her and killed the boy before he severed his head.

“Luckily, someone, who suspected the suspect’s  movement, trailed him to the building but escaped and was able to rescue the woman with the headless body of the boy”, the source added.

Confirming the incident, the State Police Public Relations Officer, Muyiwa Adejobi said the suspect was arrested with the help of some community leaders after he fled the area to Ibafo upon committing the said crime.

Adejobi, also revealed that upon further interrogation, the suspect revealed that he had sold the severed head to a woman in Ibadan, Oyo State.

The police PRO added that detectives from the Ogun police command have launched a man-hunt for the buyer of the infant’s severed head.

The suspect, however, led men from the Criminal Investigation Department to the scene of the crime and the knife with which he perpetrated the dastardly act was the only item found at the scene.

When quizzed by reporters at the scene of the crime, the suspect confessed to raping the woman and beheading her son, and casting the headless body into the bush.

All efforts by police detectives to recover the remains of the infant at the scene of the crime, however, were futile.

The suspect was also saved by the police from being lynched by a mob who had gathered in the area.