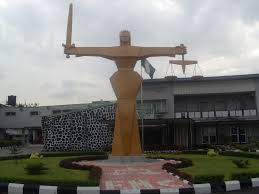 Sanusi’s counsel, Kola Awodehin (SAN) leading six other lawyers and Mr Adesegun Ajibola (SAN) leading eight other senior lawyers for FRCN, were seen in the court premises discussing as the court room was not only dark but stuffy because of the power outage.

For sometime now activities at the Federal High Courts have been paralyzed due to absence of electricity supply in the courts. All the nine electricity generating plant supplying power to the courts have packed up, forcing the courts to adjourn cases

The court had at the last sitting ordered the two parties to maintain the status quo pending the final determination of the suit filed before the court by Sanusi.

The order of the court was sequel to a suit filed by three Senior Advocates of Nigeria, Professor Yemi Osibajo, Dr Kanyinsola Ajayi and Kola Awodehin on behalf of Sanusi against FRCN and its Executive Secretary asking for the following reliefs:

A declaration that FRCN constituting itself into investigating body in the manner contained in newspaper advertorials of 24 March, 2014 acted ultra vires; a declaration that conduct, action, decision and conclusion in respect of the plaintiff particularly as it manifested in a brief note of 7 June, 2013 sent to President Goodluck Jonathan, were ultra vires and contravened the rule of natural justice.

When the case was mentioned last week the defence counsel Adesegun Ajibola (SAN) raised an objection that the court lacked jurisdiction to hear the suit as they had filed a preliminary objection to that effect.

Consequently, the presiding judge, John Tsoho adjourned the matter till yesterday for the preliminary objection with the substantive suit to be heard.