Primate Elijah Ayodele, founder of INRI Spiritual Evangelical Church, speaks about the future of Nigeria and what Nigerians should expect in 2015. 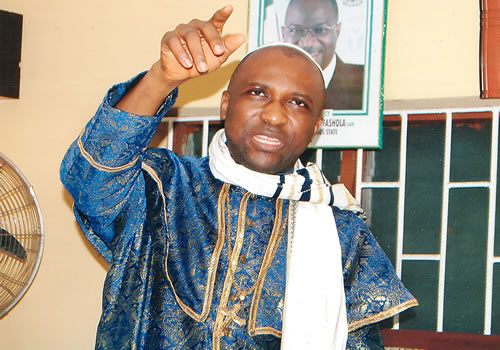 “A lot is still going to happen, and Nigerians still need to be praying ahead. If Nigerians can exercise patience, I see the economy booming. I see expatriates coming into this country because our economy would be one of the best in Africa come 2017. The government has not really addressed the issue of one nation as expected.

“If this government tries to have any kind of amnesty with Boko Haram, it would cause problems for this country. The government should not take it lightly with Boko Haram; they should fight the war against them. I see other nations supporting Nigeria in the long run. Boko Haram would still make the FG spend a lot of money. On the issue of Boko Haram, the CIA has misled the Nigerian government about it. As said by the Lord, America should be blamed, as directed by the Lord. These people are not spirits. I don’t know whether the government is afraid to address things the way they are. They should address it from the roots.

“We said it earlier this year that Abuja must be very watchful because there is going to be an attack on Abuja. The government should work more on security so that Nigerians can be protected.

“What I am saying in essence is that APC will not make the presidency in 2015, though it will be very tough.

“I am saying again, PDP will make it in 2015. There is still going to be more negotiations. Honestly speaking, if the Vice-President does not sit up, his position would be used for negotiations. Most of the defected government if not all, two would come back to PDP. There would still be more defections. APC cannot fight PDP, as they don’t have the mandate. APC did not ask from God before they came together so they cannot stand.

Thoughts on the missing Malaysian plane

“I see NFF having problems with Keshi. As a matter of fact, Keshi might not finish his tenure. Nigeria would not perform as expected at the World Cup. We should not expect much from Nigeria at the World Cup.

“Nigeria’s economy will not be fantastic in 2014. The price of food items will go up. Some markets will be shut down in the Eastern part of the country and in the Southern part. Prices of garri, palm oil and flour will go up. Price of vegetable will go up. Jonathan’s presidential economic team will fail him. Some ministers will be eased out while new ones will come in.

“The excess crude oil account will cause problems. I see that Nigeria will borrow money.

“I don’t know when this will come up but Aba will be the China of Nigeria where Nigeria will produce vehicles, motorcycles and tricycles. Exotic guns will be made in Nigeria. I am not saying it will happen in 2014 but it is part of the things that we should be expecting in the nearest future.

“It may take 30 or 50 years, but Nigeria cannot stay together for another 100 years.

“The Minister of Finance would have crisis and if care is not taken, she might not finish her tenure. I see the GMD of NNPC having problems. The price of petrol would still go up. Price of flour would still increase. I see blessings for Nigeria in agriculture. Each state governor should still go and work on agriculture. EFCC would still expose a many politicians.”