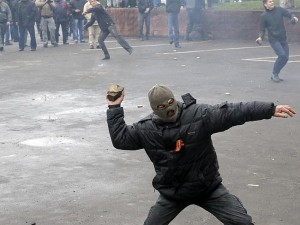 Ukrainian Prime Minister Oleksandr Turchynov has said the country was now “at war” with Russia which it blames for having troops in east Ukraine arming and orchestrating local militia to rise up against authorities.

Prime Minister Turchynov’s stark words came as about 100 pro-Russian protesters armed with bats and rocks stormed a police station in the east Ukrainian town of Gorlivka, smashing its windows and grabbing metal shields from police.

The local police force in the Donetsk region town of nearly 300,000 people reportedly put up almost no resistance, later swearing allegiance to a pro-Russian commander who took charge.

Mr Cameron was a day into a holiday in Spain with his family when he was forced to take a break today to telephone other leaders including German Chancellor Angela Merkel and French President Francois Hollande.

Mr Hollande had earlier spoken on the telephone with US President Barack Obama after the US Foreign Secretary John Kerry declared the deteriorating crisis and separatist movement as a classic Russian “destabilization drive”.

The ring around between EU leaders and the US came after the Ukrainian government in capital Kiev threatened a large scale military strike against pro-Russian militia and anonymous troops in uniform with no insignias leading the revolution that threatens to break the country up.

The uniforms with lack of markings and the armaments the men are carrying are reportedly the same as the Russian troops had when they silently invaded and absorbed Ukraine’s Crimea peninsula last month.

“The problem is it looks very, very similar to what happened previously in the Crimea so you know, if it looks like a horse and it walks like a horse, it’s usually a horse and not a zebra,” Dutch Foreign Minister Frans Timmermans said.

Russia has also amassed 40,000 of its troops on the Ukraine border in Belgorod, 75kms from Ukraine city of Kharkiv and at Kuzminka close to the border of Donetsk, the centre of fighting for the past three days.

Ukraine has set several deadlines for the militia to surrender and quit the government buildings and police stations they occupy in at least three cities including the regional capital Donetsk and for Russian troops to leave their country.

But the deadlines pass much to the amusement of militia and the mystery troops. Violent clashes have already left a Ukraine military captain dead and five of his troops injured and scores of civilians loyal to Kiev injured.