Less than 14 years after it co-hosted the Africa Cup of Nation in the year 2000 with Ghana, the National Stadium in Surulere, Lagos, western Nigeria has been taken over by commercial prostitutes.

According to famous boxing promoter, Martins Osaile, the national edifice which many saw as a pride of the nation when it was built in 1972 has now turned to a home for prostitutes.

Apart from hosting the nations cup, the multi-purpose stadium has also hosted several high-profile tournaments including the final of the 1980 Africa Cup of Nations, which the Green Eagles of Nigeria won.

However, the stadium has deteriorated because of poor maintenance culture. 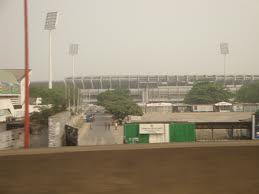 Commenting on why the stadium has turned this bad within a short  period, Osaile said it was because government officials were only interested in hiring the stadium to people, to the detriment of the state of the sports arena.

“The National Stadium, Lagos has been turned to a brothel. Someone has built rooms all around the place and prostitutes now patronise the place.

“They (officials) know about what is going on but they don’t care because they hire the place to people. All the under of the steps (of the main bowl) have been converted to small rooms, where they practice prostitution,” the boxing promoter said.

Osaile said the situation was not unique to theLagos stadium alone, saying that it is the same in most stadia across the country, except for the Ahmadu Bello Stadium in Kaduna.

“I have never seen where facilities have been so abandoned. The Liberty Stadium (Ibadan) is dead. They said Enugu stadium is under concession but where are the concession papers? Only the Ahmadu Bello Stadium is a bit neat and this is because of the Vice President, Namadi Sambo, who loves sports and comes from the state,” Osaile added.