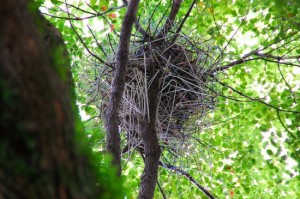 Crows are known to be highly intelligent birds, and it looks like they can now teach us a thing or two about recycling and stealing. The Asian Jungle Crow, a large-billed crow, actually builds its nest out of coat hangers that it steals from people’s homes!

Crows make use of pretty much anything they find lying around to build their hardy nests. House Crows generally build crude structures, made of interlocking twigs gathered from surrounding trees and shrubs. They weave the twigs together with little pieces of metallic wire that strengthen the nest structure. In some nests, the clever crows incorporate knotted lengths of thick plastic instead.

But perhaps the most amazing crow nests are the ones built around Tokyo, Japan. Twigs and other natural materials are hard to come by in the busy metropolis, so the birds settle for the next best thing, and that seems to be coat hangers. You have got to see pictures to believe it! A blogger had posted some of these images way back in 2005, after solving the mystery of the missing hangers from her back yard. But it isn’t just the one nest – it seems that Japanese Jungle Crows are compulsive collectors of hangers!

Sometimes the crows build their hanger nests on the power lines. This could cause huge power blackouts, especially during mating season. So the Kyushu Electric power company actually has ‘crow patrols’ that search for and destroy hanger nests on their power grid.