The dreaded Boko Haram sect is believed to be keeping the abducted girls from Chibok in Borno so as to use them as human shield as the search for them and plans to rescue them by the military intensifies. 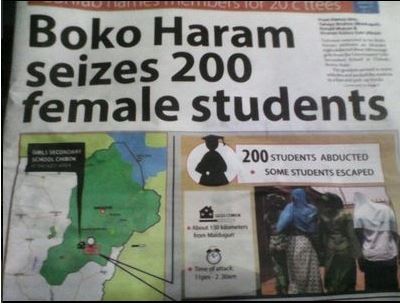 A highly placed source said, “Intelligence report confirmed that Boko Haram found it strategic to keep the girls to save their camps from bombardment by troops.”

The abducted girls topped the discussion at the National Security meeting which held on Thursday, and the military was given a marching order to rescue the girls.

According to a source, details of the exact location where the girls are being held hostage cannot be made public for security reasons and the military and the Borno State Government are not saying much for fear that Boko Haram with its widespread cells might pick up sensitive information.

The military operation is being co-ordinated by the Chief of Defence Staff, Air Chief Marshal Alex Badeh, who has been shuttling between Abuja and Maiduguri in the last one week.

Over 200 girls of Government Girls Secondary School in Chibok, Borno were abducted in night raid by Boko Haram insurgents. Some of the girls were said to have escaped while others are still being held hostage.

Parents of the missing girls have been searching in the forest but nothing has come out of it. Some aggrieved women in Borno even have plans of going into the Sambisa forest to search for the girls but it was learnt that it will not work.

A government source said, “No one will allow these women to go into the forest. These women will also not attempt it because of the delicate nature of the terrain.”