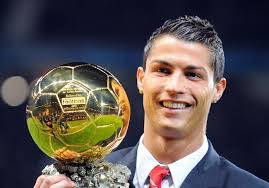 Cristiano Ronaldo has made it into this year’s Time 100 issue of Time magazine — with a tribute inside written by football legend Pelé.

The Time 100 is the magazine’s list of the 100 most influential people in the world, and the issue features tributes written by high-profile guest contributors.

Ronaldo is the only footballer who made it into the list.

Here’s what Pelé had to say about him:

Cristiano Ronaldo is one of the most influential athletes in sports today. I greatly respect his competitive mind-set on the field, and it’s no surprise that he is currently considered the best soccer player in the world.

I had the opportunity to share his joy onstage at this year’s FIFA Ballon d’Or ceremony in Zurich.

Cristiano never ceases to give his best for his national team. He reminds me a bit of my late friend and Portuguese soccer legend Eusébio. They have the same elegance and creativity.

Back when I played, I would have loved having a teammate like Cristiano to play with up front.

I would like to encourage him to keep up the hard work and to continue to fuel the passion for the sport among today’s youth. Also, I wish him the best this summer at the World Cup in Brazil. But if Portugal goes to the final against Brazil, I’m sorry, Cristiano, but I want Brazil to win.