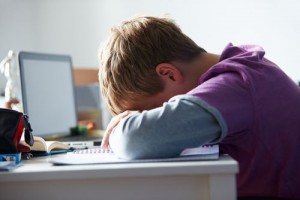 A Pennsylvania high school student who recorded alleged bullying on an iPad was punished for his efforts—and now his parents are fighting back. The 15-year-old boy, who has learning disabilities, recorded his tormenters in class after enduring regular bullying, his mother tells the Pittsburgh Tribune-Review.

South Fayette High School reacted by slapping the teen with detention and dragging him before a judge for violating wiretap laws. “The whole thing has been a horrible nightmare,” said the boy’s mother, Shea Love. “This whole ordeal has made my son miserable.”

School officials said nothing to the press, but according to a transcript of a legal hearing, the teen said he recorded his tormenters “because I always felt like it wasn’t me being heard.”

Love says that on the recording, one boy tells another to yank her son’s pants down, and the teacher tells them to get back to work. “What?” says one of the boys. “I was just trying to scare him.” Ultimately, a judge found the teen guilty and his parents paid a fine. Now the boy is seeking an appeal and his parents are pursuing a civil suit against the district, WPXI reports.