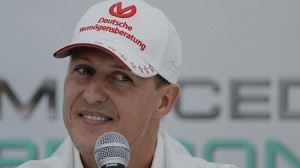 Manager Sabine Kehm said in a statement that “Michael is making progress on his way.” She added that “we keep remaining confident.”

The 45-year-old Schumacher fell while skiing in France and hit the right side of his head on a rock, cracking his helmet. Doctors operated to remove blood clots from his brain but some were left because they were too deeply embedded.

Schumacher’s condition stabilised after he was placed in the coma. In late January, doctors began the process of withdrawing sedatives to try to wake him up. [AFP]