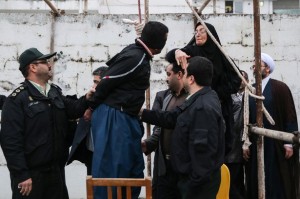 A murderer was spared from the hangman’s noose with seconds to spare – by the mother of his victim.

The killer, named only as Balal, had been blindfolded and bound with the noose placed round his neck when he was reprieved only seconds before he was due to be executed.

The parents of his 18-year-old victim Abdollah Hosseinzadeh jnr were set, under Sharia law,to take part in the hanging of the man who had killed him in a street knife-fight seven years ago.

The teenager’s brother and father were on the hangman’s spot and due to kick the chair out from under the the killer.

But at the very last second the dead boy’s mother had a change of heart and slapped him across the face before pulling the noose from round his neck.

Her husband Abolghani Hosseinzadeh, Snr., said his wife had a change of heart after their dead son appeared to her in a dream.

The couple had already lost a son aged 11 after he died in a motorbike crash.

Said Mr Hosseinzadeh: ” Three days ago, my wife saw my elder son in a dream telling her that they are in a good place and for her not to retaliate.”

Seconds after releasing Balal from his intended death spot, his own mother ran over to  his mother Mrs Hosseinzadeh and threw her arms round her as she wept in thanks for her incredible act of forgiveness.

“Abdollah was offended after a row and kicked him. But Balal pulled a kitchen knife out of his sock and didn’t know how to handle a knife. He was naive.”

So far this year Iran has carried out at least 100 executions following the estimated 500 people were put to death last year.

The country is second only to China in the number of executions carried out.

At the weekend Iran said it executed 16 “rebels” in an immediate reprisal after gunmen killed at least 14 border guards near the border with Pakistan.

Deputy Interior Minister Ali Abdollahi said the guards were killed in an ambush set by Iranians who were “members of hostile groups”.

Iranian authorities said they hanged 16 “rebels” held at a prison in the Sistan-Baluchestan region.

But Iran halted the execution of 26-year-old interior designer Rayhaneh Jabbari on Tuesday.

She was due to hang for the stabbing to death seven years ago of a doctor who she claimed drugged her and tried to rape her.

Under Sharia Law rape is regarded as adultery.