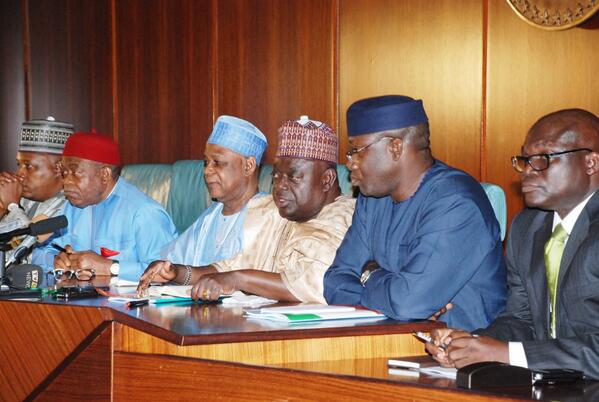 The expanded security meeting with the 36 governors in attendance on Thursday condemned Gov. Murtala Nyako’s memorandum which allegedly accused the Federal Government of carrying out genocide against the people of the north.

The News Agency of Nigeria (NAN) reports that the meeting also had all the heads of security agencies, Service Chiefs and religious leaders in attendance.

Briefing State House correspondents on the outcome of the meeting, Gov. Theodore Orji of Abia said that the memorandum was discussed and all the participants unanimously condemned it.

“The memo that was written by one of our colleagues, that is the Gov. of Adamawa, was discussed and there was a very unanimous condemnation of that memo and all officers, all people in the position of authorities were advised to be cautious of what they say.   ”That what they say should be what will, at least, level every person, makes us to know that this country belongs to us not something that will demoralise us, not something that will excite or incite people to go the negative way”,

He said the meeting also recognised the fact that security issue should be seen and treated as a corporate issue which should not be left for the Federal Government alone to handle.

Orji said that the meeting agreed that all the three tiers of government should be involved in ensuring security of lives and property of all citizens.

He said that the meeting enjoined the media to partner with government and all security agencies in the fight against insurgency in the country.

According to him, the participants also agreed that Boko Haram insurgency was not religious in any form as both Muslims and Christians were being killed by the insurgents.

Also briefing the correspondents, Gov. Babangida Aliyu of Niger said that the meeting agreed that the Federal Government should continue to sustain its cooperation with the neighbouring countries in the fight against insurgency.

He said the meeting also agreed on the involvement of all security agencies, including the military institution, in the ongoing fight against all forms of violent crimes, especially insurgency in the country.

The meeting, which lasted for over eight hours, was presided over by President Goodluck Jonathan with Vice President Namadi Sambo in attendance.

The Governors of Plateau, Jigawa, Oyo, Imo, Rivers, Kano, Ekiti, Ogun, Kebbi and Yobe were represented by their deputies.

Also in attendance were Ministers of Police Affairs, Defence, Interior, Federal Capital Territory, Foreign Affairs and the Attorney General of the Federation.

Also at the meeting were the Sultan of Sokoto, Alhaji Sa’ad Abubakar and the President of the Christian Association of Nigeria (CAN), Pastor Ayo Oritsejafor.

It will be recalled that the meeting was put forward from last Thursday to allow governors of the All Progressives Congress (APC) to attend. (NAN)