The nature of beauty is one of the most fascinating riddles of life. Is beauty universal? How do we know it? 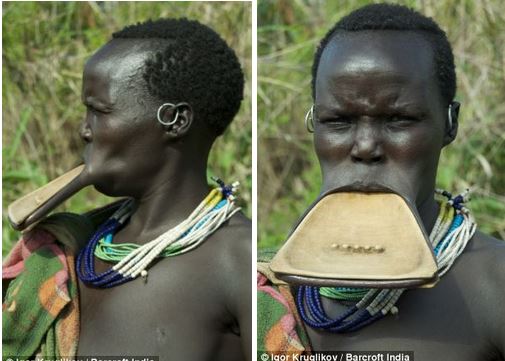 For example in the Ethiopian Suri tribe an enormous plate implanted in a girl’s lip is considered to be a sign of beauty.

The Suri tribe belongs to Surma family that also includes Mursi and Me’en.

Piercing and lip plates are a strong part of the Suri culture.

At the point of puberty most women have their bottom teeth removed in order to get their lower lip pierced.

Once the lip is pierced, it is then stretched and a lip plate is then placed in the hole of the piercing.

Having a lip plate is a sign of beauty and the bigger the plate, the more cattle the woman is worth.

When the woman are ready to get married, her father can demand 40 cows for a small plate and 60 for a larger one.

Men on the other hand paint their bodies and participate in stick fighting.

It is a way for young men to prove themselves to the young women.

Many stick fights end within the first couple of hits.

Stick fighting has proven to be dangerous because people have died from being hit in the stomach.

Since stick fighting draws a large audience, it becomes a threat of danger.

Shooting can easily break out and this seems to be the new trend for young Suri men; using guns instead of sticks.

It is still unknown why and how lip plates came to be used.

One theory says lips plates were used to discourage slave owners from taking the women who had them. In recent years, some young women are refusing to have their lips pierced.