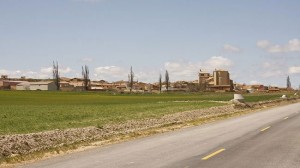 A village in Spain is set to make history this week when it votes on whether to change the second half of its name.

The 60 residents of Castrillo Matajudios – which translates as ‘Castrillo Kill Jews’ – will vote on the name change after Mayor Lorenzo Rodriguez submitted the proposal recently.

Ironically, according to the Jerusalem Post, the village flag features a Star of David emblem similar to that on the Israeli national flag.

Rodriguez has suggested the name be switched to Castrillo Mota de Judios, meaning ‘Castrillo Jews’ Hill,’ The Independent newspaper reports. It is believed this was the original name of the village before it was changed to Castrillo Matajudios during the Spanish inquisition.

The mayor says the town was christened with the name after a number of Jewish people were massacred in nearby Castrojeriz in 1035, prompting survivors to move to the Castrillo hill. A second massacre occurred there in 1109.

The Matajudios name is similar to a common expression used across northern Spain to describe a drink of lemonade and alcohol – ‘matar Judios’, meaning ‘kill Jews.’

Regardless of how the village votes, it will hold its annual ‘matar Judios’ event on Good Friday during which 40,000 gallons of lemonade is expected to be sold.