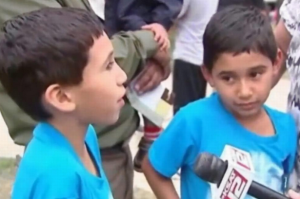 When these seven-year-old twins were kidnapped in their mum’s car, the brave lads almost left the man at the wheel seeing double.

Luis and Lucius Lozada, who were also in the vehicle with their one-year-old baby brother, battered the carjacker until he let the boys out.

Lucius said: “I was kicking him.”

Luis said: “I was hitting him with a [toy] snake.”

The drama unfolded after their mum, Lucia, got the three boys into her gold Nissan Altima outside their home yesterday in San Antonio, Texas.

Lucia, who was planning to drive to church, popped back into the house for a few seconds because she had forgotten the baby’s bottle.

San Antonio police chief William McManus said: “When she came back out the car was gone.”

He added that the twins immediately began laying into the carjacker and screaming at him.

The officer said: “They just knew that that guy wasn’t supposed to be in the car and they were beating on him.”

The thief let the boys and the baby out on a street in Las Palmas, roughly 10 miles from their home.

They were reunited with their mum within hours.

She told TV reporters she had only just bought the toy snake for the lads, adding: “I didn’t want to buy it for them, but I guess God knew that he was going to use it today.”

The mum praised the bravery of her twins, saying: “I thank God for them that they took charge.

“Sometimes things in our lives have to happen for us to realise what we have and not to take things for granted.”

The man who stole the car is thought to be in his mid-30s. Lucia said she had seen him in the neighbourhood a few times before.