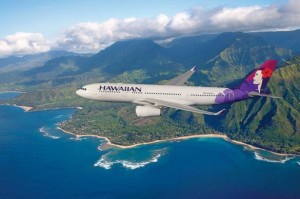 A schoolboy stowaway miraculously survived temperatures of -62c during a six-hour flight after climbing in to the wheel well of plane to Hawaii.

The 16-year-old was only discovered after he was found wandering on the tarmac at the Maui airport with no identification before being questioned by the FBI.

The only possession he had was a comb.

FBI spokesman Tom Simon said the runaway had fallen unconscious several times during the flight, which reached an altitude of 38,000ft.

“The kid is lucky to be alive,” Simon said. “He was unconscious for the lion’s share of the flight.

“He doesn’t even remember the flight. It’s amazing he survived that.”

The boy will not be charged and has been referred to child protective services following the incident.

Security footage from the San Jose airport in California captured the teenager scaling a fence to board the Hawaiian Airlines Flight 45 on Sunday morning.

Just hours earlier he had had an argument with his family Mr Simon added.

After being detained he received medical treatment but astonishingly was found to be unharmed.

“Our primary concern now is for the well-being of the boy, who is exceptionally lucky to have survived,” she said.

Aviation expert Peter Forman said he was shocked the teenager managed to survive.

He said: “The odds of a person surviving that long of a flight at that altitude are very remote, actually.

“I mean, you are talking about altitudes that are well above the altitude of Mount Everest.

“And temperatures that can reach 40 degrees below zero.”

“A lot of people would only have useful consciousness for a minute or two at that altitude.

“For somebody to survive multiple hours with that lack of oxygen and that cold is just miraculous. I’ve never heard of anything like that before.”

Rosemary Barnes, a spokeswoman at the San Jose airport, said the FBI and Transportation Security Administration were investigating how the teen breached security and made it onto the plane.

Heat from hydraulic lines in the wheel well along with retained heat in the tyres could have helped keep the stowaway warm, America’s Federal Aviation Administration reported.

In addition, a plane’s steady climb to high altitudes can allow passengers to drift into an unconscious state as oxygen becomes scarce.

As the heat cools from the wheel well, a stowaway can develop hypothermia, a condition that help preserves their central nervous system keeping them alive.

Both hypoxia and hypothermia may resolve as the plane gradually descends for landing, the administration added.