A family has told of their horror at discovering a huge rat ‘the size of a cat’ living in their attic. 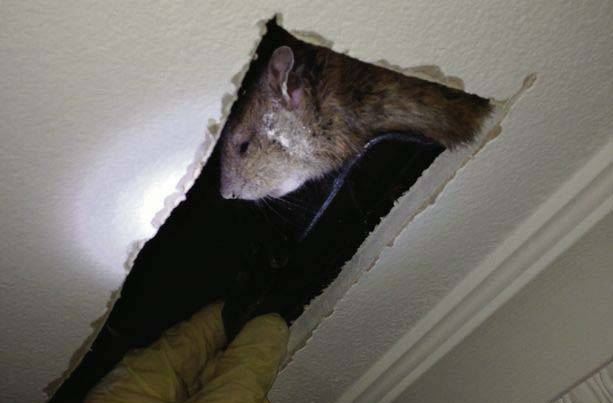 The Brobdingnagian rodent was found by pest control who had been called in by Grace Walters and her family after they heard loud scratching sounds coming from the ceiling.

After being captured alive, pest control measured the rat at a massive 24 inches (61cm) from nose to tail – almost three times larger than a regular brown rat.

‘They had to cut a hole in the ceiling to reach it and when they grabbed it, none of us could believe it. It was the size of a domestic cat,’ Ms Walters said.

‘It’s quite scary a rat can grow this big and strong, especially when you have kids in the house.’

Exterminator Marcus Giusti confirmed it as one of the biggest rats he had ever seen in his line of work, adding that it becoming far harder to exterminate them because of restrictions on poisons.

‘We’ve been shocked by the number and size of rats recently,’ he warned.

‘There’s an endless amount of food in the sewers where they live and if they’re living longer and eating lots, they’ll be getting bigger.’