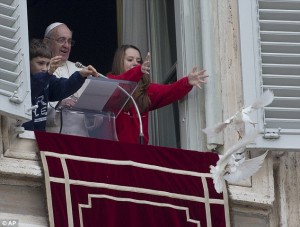 A intrepid hawk has been taken on by the Vatican to protect the pope’s doves after two were killed in front of horrified crowds by a crow and seagull, according to a Catholic weekly.

The eagle-eyed bird of prey named “Sylvia”, who was specially trained for the task in northern Italy, has been taken on by the Swiss Guards according to a report in Credere, which will be published Thursday.

It is hoped the Harris Hawk, with a wingspan of 120 centimetres (47 inches), will scare off predators looking to make a quick meal of a holy dove.

The doves are traditionally released from the Vatican a few times a year as signs of peace, but when two children let fly the white-feathered birds from the window above St Peter’s Square on January 26 this year, they immediately came under attack. 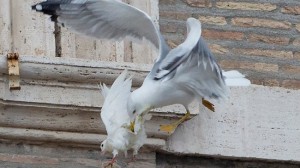 The doves did not survive the brutal mid-air collision.

The use of birds of prey to keep unwanted pests away is not new: they have been used around airports and at football stadiums to get rid of pigeons before matches and have been deployed in the Colosseum to preserve the monument from pigeon droppings. [AFP]