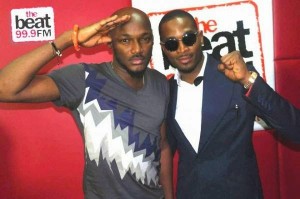 I came across this article online and decided to share it with my sweet sweet readers.
It’s a list of the hottest and sexiest male celebs in Nigeria that most women would do anything to date.
This is from an individual’s personal point of view, so don’t take it personal.
However, of you don’t agree; give me your own take.
Enjoy: –
1) Richard Mofe Damijo
This ‘legendary’ Nollywood actor and Politician is top on this list. Though married with grown up kids, the Delta State born popularly called RMD is still on the wish list of a lot of Nigerian women. For those who are still ‘wishing’ to have RMD’s babies, he is 53 and it might just be too late.
2) 2face Idibia
Despite 2face’s many escapades with women, there are still some ladies willing to forget his past in a whim if given the opportunity to date him. Not only does this Benue state born musician possess good looks, there is equally something about him that attracts even the most celibate of women. His reputation as a very fertile man doesn’t hurt either. Continue after the cut.
3) Chiwetel Ejiofor
One will think that with his comments that ‘he’s not from Nigeria’, this Enugu State descendant will not be on the mind of any right thinking Nigerian woman. Alas, the reverse is the case as this ‘foreign’ Igbo man features in the dreams of at least 2 out of every 5 woman. His super movie star status is also a big plus.
4) OC Ukeje
Apart from the fact that OC is a very good actor, his boyishly good looks place him on this list. He also comes off as innocent, a trait many women supposedly like.
5) Praiz Adejo
Blessed with a sonorous voice and dashing looks, Praiz Adejo’s spot on this list is surely no mistake. The Kaduna State born hunk’s perfect gentleman look is a sure winner for any woman any day, anytime.
6) Lynxxx
The fact that Musician Lynxxx comes from a rich home is an added advantage (His dad is a former deputy governor). His physical structures and all round swag are sure good traits to attract women.
7) Kalu Ikeagwu
Kalu’s mannerisms and sweet voice are some of the things that endear this fair skinned hunk to women. The fact that he has some sort of oyiboness is another spice. The actor is single and needs a God fearing woman in his life. Ladies wake up, all you have to do is become God fearing, that easy.
8) D’banj
D’banj has a reputation for being a playboy and flirt as evidenced in the lyrics of his songs. Despite this fact, there a lot of women who’ll like to be the Kokomaster’s ‘scape goat’.
9) Dayo Okeniyi
This Lagos born actor famous for starring in ‘The Hunger Games’ calm look reportedly makes women go weak at the knees. His charming smile also does the trick. He is a man any woman will love
10) Olamide
Last but not the least is Nigeria’s current street king, Olamide Adedeji a.k.a Badoo. Olamide’s all-round street cred and rugged but sexy looks keep the women coming. His never say die attitude, confidence and the fact that in some quarters he is considered to be Nigeria’s best rapper is a big plus.
Share
Facebook
Twitter
WhatsApp
Previous articleMan Taking Selfie Near Train Tracks Gets Kicked In The Head By Conductor
Next articleAnnie Idibia Returns To Movie Set After Baby-break
- Advertisement -