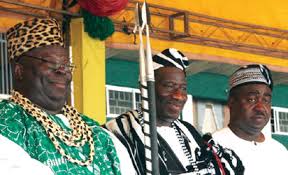 The paramount ruler of Tiv people in Benue State, the Tor Tiv, Dr. Alfred Akawe Torkula, has vowed not to concede any piece of land in his domain as far as his powers allow, for the proposed grazing reserves for Fulani herdsmen.

The Tor Tiv, according to his media aide, Godwin Ber, made his position known when the Tiv Professional Group (TPG) paid him a courtesy call at the weekend.

Suspected Fulani gunmen had wreaked havoc in Tiv communities in recent times, killing residents, burning their houses and destroying farmlands over disagreement on land for grazing.

The frequent outbreak of deadly clashes between herdsmen and local farmers in some northern states forced the Federal Government to propose the establishment of grazing reserves in all states of the federation as a step towards lasting peace.

But the monarch argued that due to the current growing population, it is preposterous for Tiv people to let go their lands for the purpose of grazing.

“Within my powers, I will not concede one inch of Tiv land for grazing reserves or grazing routes. My subjects are farmers and they need the land to farm. In modern times, and globally, those investing in cattle acquire lands for ranches. They then source for food for their cattle. This solves a lot of conflicts”, he said.

The Tor Tiv posited that open air grazing model of cattle rearing is archaic and unsustainable and therefore should be jettisoned, adding that the provision of grazing reserves would not solve the farmers/herder crisis in the state.

“Farming is our occupation and we don’t even have enough land. Tiv lands in Taraba and Nasarawa States are gradually being taken over. They still want us to give up the little land we have left for grazing. That is too much to ask; it is unacceptable”, he said.

The traditional ruler, who lamented that his ancestral home was sacked and razed down by the rampaging herdsmen, explained how it took the presence of military escorts for the people to even bury their dead.

“The corpses of kiths and kins are decaying, yet no one can go bury them because my ancestral home has been occupied by herdsmen”, he added.

He, therefore, tasked security agencies to reclaim the occupied Tiv territories so that the natives can go back to their farms just as he called for the resuscitation of the moribund Mzough U Tiv Association, a platform where Tiv sons and daughters brainstorm on development issues.

Speaking on behalf of the Tiv Professional Group, Dr. Zachariah Gundu, a lecturer at the Department of Archaeology, A.B.U Zaria, expressed support for the Tor Tiv’s position on grazing reserves, adding that they would do everything possible to revive the forum that will enable indigenes of the land meet and deliberate on issues.