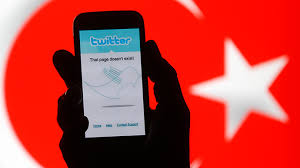 Turkey’s telecoms authority has lifted a two-week-old ban on Twitter after the constitutional court ruled the block breached freedom of expression, an official in Prime Minister Tayyip Erdogan’s office said.

“The ban has been lifted” the official told the Reuters news agency by telephone on Thursday minutes after TIB, the telecommunication regulator, removed court orders blocking the site from its webpage.

Access to Twitter was blocked on March 21 in the run-up to local elections last Sunday to stem a stream of leaked wiretapped recordings of senior officials that had appeared on the site, prompting Prime Minister Tayyip Erdogan to say he would “root out” the network.

Turkey’s Official Gazette on Thursday morning published the Constitutional Court’s ruling from Wednesday, further piling pressure on the telecoms authorities to lift the ban, which had faced widespread international condemnation.

Following the court’s decision, President Abdullah Gul, who has opposed the bans, was quoted as saying both websites should be made available in Turkey once more.

Within minutes of the ban being lifted, the micro-blogging site was flooded with messages, with one user saying “Welcome back to Twitter, Turkey.”

Other users inside the country complained that they were still unable to access the site. [Reuters]