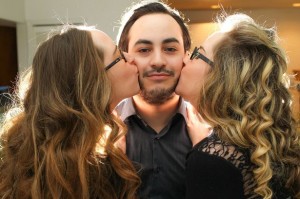 Delivery boss Ian, 27, started out as Victoria’s sweetheart, and for four years they had a perfectly normal relationship. But in 2012 Amanda suffered a painful break-up with her then boyfriend which left her devastated.

Seeing her sister alone and unhappy, Victoria hatched a bizarre plan – Ian would become boyfriend to them BOTH. All she had to do was persuade him.

She says: “Ian and I had an undeniable physical attraction and a strong bond. We have a solid relationship built on trust and understanding.

“Ian knows that my relationship with Amanda has always been a huge part of my life and that I would do anything for her. So when she broke up with her boyfriend just over two years ago, I shared her pain and her heartbreak.

“It was devastating to see her so unhappy. It hurt me almost as much as it hurt her. It seemed to me almost natural to invite her to join us in our loving ­relationship.

“Ian was unsure at first, particularly as he knew that his parents wouldn’t be very happy, but now we’re all ­blissfully in love.

“He loves us equally– albeit in quite different ways. He considers me his rock. I am always there to cater for his emotional needs.

“Sometimes I get jealous of the ­relationship he has with Amanda, but I know that he loves me.

“We have spoken about marriage and I’m looking forward to the day when we wed, but if Amanda and Ian get married ­afterwards then that’s fine. The ­important thing is we’re all together, and all happy.”

Ian has his own flat in Guttenberg, New Jersey, and the girls, non-identical twins born just 30 minutes apart, live just a few streets away with their appalled parents.

He admits that juggling his ­relationships with the twins can be quite a challenge – but insists that it’s worth all the effort.

“I’m in love with them both the same, although I expect Vicky and I will get married first,” Ian says.

“Victoria and I have a much more traditional relationship. It’s very loving and quite harmonious. I tend to be the dominant one with her.

“But with Amanda, there is no ­question that she wears the trousers. She is ­incredibly feisty and rules the roost.

“In bed it is very sensual with Victoria while with Amanda it’s wanton. They wear me out.

“There are times when I just want to have a few days’ peace. That said, it’s a little like being a multi-millionaire,” he concedes. “Do I ever really have a bad day?”

Well, maybe – when he has to face the parents. Both sides of the family are deeply unhappy about the three-sided arrangement.

The twins’ father, David, who raised his girls in the Catholic faith, describes the relationship as being like “a pair of two-year-old shoes still not broken in yet”.

David, along with wife Ingrid, hope that their girls “will see sense” one day and that Amanda will quit the ­relationship leaving Ian and Victoria to have a ­conventional marriage.

But the twins just don’t see that there’s a problem. They admit they argue constantly but insist that the one thing they agree on is their love for Ian.

Amanda says: “One day, I hope that I might find a man of my own but at the moment this is working well for us all.” Right from the start, when Victoria suggested it, Amanda thought it was a great idea.

“I was devastated after my previous relationship ended,” she says. “My self-esteem was on the floor.

“So when Vicky invited me to join her in her relationship with Ian, I felt grateful – and excited.

“My sister and I traditionally have different tastes in men, but I’ve always found Ian attractive, and it was easy falling in love with him. Me and Vicky shared everything growing up. Now we share the same soulmate.”

But Amanda readily agrees that each twin brings something very different to the ­arrangement.

“Vicky and Ian are very much more lovey-dovey together than I am with him.

“My relationship with Ian is a lot more fiery. It’s much more physical and we enjoy each other sexually with great passion.

“Although one of the ground rules is that the three of us never make love at the same time, that’s just not my thing.

“I want to share my life with someone who gives me everything and although Ian is shared with my twin, I feel he gives me that.

“We’re living every day blissfully, and that’s what counts.

“Our relationship might be unusual, but it works for us.”