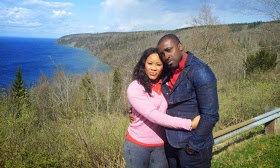 The duo reportedly welcomed their first child in the US few days ago.

Edoho is, however, yet to confirm the story as he hasn’t picked his calls or responded to the text message sent to him.

His wife is also yet to give any hint on her social media accounts.

I reported few months ago that the duo would be expecting baby number one after a traditional marriage in Arochukwu, Abia State in December, 2013.

They sparked wild media interest when, during the unveiling of Heineken bottle in 2012, he took some time off to introduce Onyenaucheya as his new wife.

Edoho and his former wife, Katherine Obiang, got separated in 2011 over allegations of battery.

Congrats to them if the reports are true.