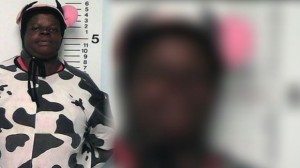 This is definitely one of the craziest stories I’ve ever heard. People who live in Monroe, Louisiana are relieved after police took four years to track down a murderer who took the lives of nine people. Luckily, the “Facebook Friend Request Killer” has been jailed. People were overjoyed when they got word 31-year-old Sha’Quonda Johnson had been arrested. Police took Johnson into custody and charged her in connection with nine murders that took place between January of 2009 and December of 2013. Johnson had been dubbed by police as the ‘Facebook Friend Request Killer’ because she would leave a calling card at the scene of every murder related to the friend request feature on Facebook.

The most recent card had an image of the Facebook logo along with two boxes, one displaying the words ‘Accept friend request’ and the other ‘Deny friend request’, with the deny box being checked in red ink. 86-year-old Abel Johnson, great-grandmother to the suspected killer, spoke with CNN about possible motives behind the killings. “Sha’Quonda was always such a nice girl growing up, though she was a lonely child who just wanted friends.

There’s no crime in wanting friends, is there?” Detective Paul Horner with the Monroe Police Department explained how Johnson was finally apprehended. “At every murder scene she would leave a card on the body with scribbled words written such as, ‘Maybe next time you’ll be my friend on Facebook motherf*cker’, or ‘who’s got more friends on Facebook now b*tch!’”

Horner said. “All of the people that were murdered lived in the same apartment building or were people that Johnson knew personally. We then found a Facebook account belonging to Ms. Johnson. In her ‘about’ section she stated, ‘If you don’t accept my friend request I will kill you’,” Horner continued, “She also had written in her profile, ‘If we’re friends on Facebook, we cool. If you don’t want to be friends with me on Facebook, we have a problem’. So yeah, we knew we had the right person.”

“When we raided Johnson’s home today we found the suspect at her computer. She was on Facebook sending out more friend requests,” Horner told reporters. “It’s a good thing we caught her before she had the chance to kill more innocent victims whose only crime was not wanting to be her friend on Facebook.”