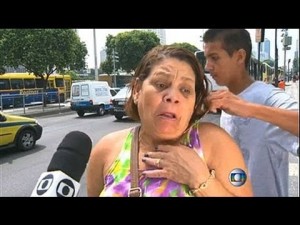 Talk about mugging for the camera.

A Rio de Janeiro woman was getting interviewed about street crime by Brazil’s RJTVwhen a man ran up and attempted to steal her necklace, in footage published by Globo TV on Wednesday.

In the video, a reporter asks the woman if she is worried about crime in the city center just before an unidentified man pops into the frame and snatches her gold necklace, according to NPR.

The apparent thief rips the necklace off, but the woman manages to hang onto her jewelry. The reporter briefly pursues the young hooligan, but fails to catch him.

The would-be necklace thief was later reportedly apprehended by cops.