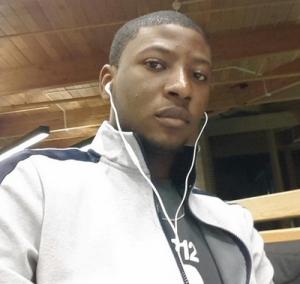 A college student visiting Colorado for spring break fell to his death after eating marijuana cookies in what’s believed to be the first publicized fatality linked to pot since its legalized sale in January.

Levy Thamba, a 19-year-old exchange student at Northwest College in Powell, Wyo., had just eaten the pot-laced treats with friends last month when he became “very agitated and upset” and ran off a fourth floor hotel balcony, according to the Denver Coroner’s Office.

Three of Thamba’s friends, who said it was the first time any of them had consumed marijuana, said one of them had purchased the cookies from a legal supplier. At least one of them is 21. “The kids took this cookie, one of them took a bite and then got kind of sick,” Chief Deputy Coroner Michelle Weiss-Samaras said. “The other two obviously didn’t have a problem and then this one became very agitated and upset and didn’t do well.”

“He got up and just started running and hits the railing,” Weiss-Samaras described the autopsy report’s findings. “I’m not really sure that he knew what was going on … the kids were pretty traumatized.” The teen’s autopsy found him having 7.2 nanograms of active THC per milliliter of blood. The state law in impaired driving cases sets a standard of 5 nanograms per milliliter.

Toxicology tests for other drugs or alcohol also came back negative and Thamba didn’t have any known physical or mental-health issues, according to Weiss-Samaras. The official cause of death for Thamba, who’s originally from the Republic of Congo, includes “marijuana intoxication.”

“It’s very sad. Obviously nobody knows how your body’s going to act,” Weiss-Samaras said of someone trying marijuana for the first time. With the Denver Coroner’s Office overseeing 64 counties, Weiss-Samaras couldn’t definitely say that Thamba’s death was the first related to marijuana consumption since January.

To her knowledge Thamba’s death is believed to be the first.