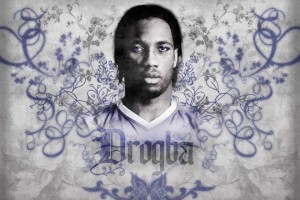 The Ivorian football star Didier Drogba is well known for his prolific scoring as a forward for Chelsea, as well as for being captain of the Côte d’Ivoire national team for the last decade.

Drogba has the distinction of being highest goal-scorer of any foreign player in the Premier League, and was even voted the best Chelsea player by supporters of the club in 2012.

But beneath the surface, there are many things you didn’t know about Didier Drogba.

1. His mother nicknamed him ‘Tito’ Drogba’s mother, Name, nicknamed him “Tito” after President Broz Tito of Yugoslavia, whom she greatly admired.

2. He was sent to live with his uncle in France at a young age At age 5, Drogba was sent to live with his professional footballer uncle, Michel Goba, in France. He returned to his family in Abidjan three years later after becoming homesick, but moved back to France after both his parents lost their jobs as bank workers He was reunited with his parents in 1993 after they moved to France

3. Drogba’s parents moved to Antony, a suburb of Paris, in 1993. He moved back in with them and his siblings, and began playing football on a more frequent basis.

4. He’s the most expensive Ivorian player in history

In the summer of 2004, Drogba signed a contract with Chelsea for $40 million. He turned out to be worth it, though, as he helped the club win its first league title in 50 years.

5. Both his brothers are footballers

7. He was also the first player to be sent off in a European Cup final for violent conduct In the 117th minute of the 2008 Champions League final, Drogba slapped Manchester United defender Nemanja Vidic. Chelsea went on to lose the game in penalties after Capt. John Terry took Drogba’s place in the shootout and missed.

8. Drogba used his position to help the peace process in Côte d’Ivoire After Côte d’Ivoire qualified for the 2006 FIFA World Cup, Drogba made a public plea to armed combatants in his country to lay down arms during the tail end of the civil war.

9. Drogba was appointed a goodwill ambassador for the UN in 2007
Due to his charity work and involvement in the peace process in Côte d’Ivoire, the U.N. Development Program named Drogba goodwill ambassador to bring more attention to issues in West Africa, and to support the millennium development goals across the world.

10. The Didier Drogba Foundation’s first initiative was to build a hospital in Abidjan

Drogba decided on the foundation’s initial direction after visiting hospitals in his home town. ”I decided the foundation’s first project should be to build and fund a hospital giving people basic healthcare and a chance just to stay alive.”