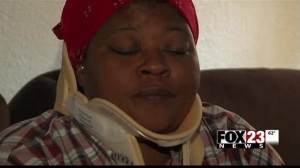 Annie Mougell-Walker was shot in the back of the head Monday afternoon by her 11-year-old grandson after arguing with him over his bad behavior in school. While she survived the shooting, Mougell-Walker must now live with a bullet lodged in her skull, according to Fox 23.

According to police, the 42-year-old Tulsa, Okla., grandmother said she was upset when her grandson brought home a poor progress report. At some point, the child allegedly slipped into his grandmother’s bedroom to retrieve a .22-caliber revolver and shot her in the back of her head.

The fifth grader was booked into a juvinaile detention center and charged with shooting with intent to kill.

The grandmother is surprised as to how her own grandson could even think of killing her. “He got in trouble today at school, so when I got home I was gonna talk to him furthermore about it,” Mougell-Walker said. But instead of a conversation, “All I saw was a big bang of a flash and heard it, and I knew I was shot in the back of my head.” The worried grandmother also said how the child told her that he hears voices and how those voices commanded him to pull the trigger.

Mougell-Walker was rushed to a nearby hospital after the shooting, where she was interviewed by officers about her grandson’s role in the shooting. When officers spoke with the child, he initially denied he was the one who pulled the trigger.

Doctors could not remove the bullet lodged in Mougell-Walker’s skull, so she must wait until surrounding tissue pushes the foreign object out on its own. Doctors will then be able to operate and remove the bullet. Despite her physical pain, Mougell-Walker still loves her grandson. Upon her release from the hospital, she even attempted to visit the youth but was in far too much physical pain to do so.

“You don’t bring someone in your house that you don’t care for,” she said. “I’ve been having him for many years since he was two, and I love him very much.”

Meanwhile, the young boy is sitting in a juvenile detention center awaiting his hearing.