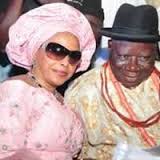 Wife of Ijaw national leader, Chief Edwin Clark, Dr. Abisola Sodipo-Clark, is set to throw her hat in the ring for the Ogun Central Senatorial District seat on the platform of the Peoples Democratic Party (PDP).

This was contained in a statement signed by Ogun State PDP publicity secretary, Waliu Oladipupo.

According to Oladipupo, Mrs. Sodipo-Clark, who hails from Abeokuta North Local Government Area of Ogun, was in the state capital yesterday to consult with PDP chieftains and members ahead of the 2015 general elections.

The statement indicated that Sodipo-Clark, who was at the PDP secretariat, was received by party members led by the state chairman, Chief Adebayo Dayo; secretary, Alhaji Semiu Sodipo; former deputy governor of Ogun State, Alhaji Rafiu Ogunleye; and party chieftain, Alhaji Agboola Alausa, among others.

Justifying her political ambition, Sodipo-Clark, whose two children were shot dead in a car owned by Dr. Iyabo Obasanjo-Bello in 2003, told newsmen that she is eminently qualified for any political position adding that she was in Ward 2 Ikija, to renew her membership card of the PDP and consult with party members.

“I’m not going to say no and I’m not going to say yes. What I’m here for is to consult. I’m somebody that believes in wide consultation and I believe that if somebody is going to take a step in a democracy, you need to consult with your leaders, with your elders and with other women, so that when we join hands together, things can be built up properly”, she stated when asked to confirm if she’s vying for a seat in the senate.