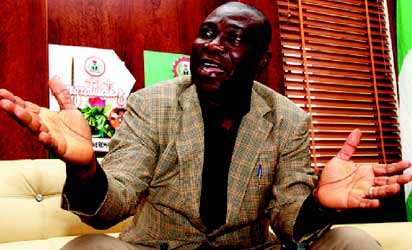 The Deputy Senate President, Sen. Ike Ekweremadu, says the 2015 elections will hold in Adamawa, Borno and Yobe states, in spite of the emergency rule in the affected areas.

Ekweremadu said this on Wednesday when a delegation from the European Union (EU), led by Mr Aloiz Peterlee, visited him in Abuja.

According to him, the right of the citizens to vote is one of the fundamental human rights that are not suspended under the emergency rule.

“We just extended the state of emergency and it will expire in November. We hope that by then, we would have contained the insurgency.

“If elections come and there is still insecurity, we will still hold election because we have had local government elections in the North-East despite the state of emergency”.

Ekweremadu also told the delegation that the Electoral Act was being amended to allow for introduction of electronic voting at the appropriate time.

“We know the electronic voting is a completely new system and it is usually surrounded by all kinds of problems.

“In as much as it is quite attractive, we want to ensure that we don’t make the mistakes that others have made.

“We need to learn from their mistakes and improve on our system. That is why even in our amendment, we said that INEC would be free to use electronic system, when they are ready.

The deputy senate president explained that election violence was on the decline going by the violence free elections conducted recently in Edo, Anambra and Ondo states.

He said that funds had been provided in the 2014 budget to conduct recruitment of more personnel into the Nigeria Police Force to help curtail election-related violence.

The Head of the EU team, Mr Aloiz Peterlee, said that the delegation was a follow up mission to assess the level of electoral reforms in the country based on its recommendations to INEC in 2011.

“We have met with the PDP and INEC and during our meeting with INEC, we did a review of all our 49 recommendations we gave three years ago.

“We have seen that some of the recommendations were not just taken into consideration but were already implemented.

“But some are partly implemented and some are beyond the limits of INEC”.

Peterlee urged the major political parties in the country to make commitment to non-violence during electioneering. (NAN)