Abducted Newborn Found Safe In Quebec Thanks To Facebook 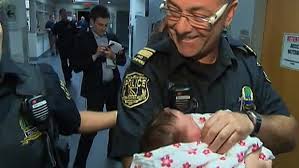 Facebook is being credited with helping police locate a baby girl who was abducted from a maternity ward mere hours after she was born.

Canadian police issued an Amber Alert on Monday after the infant was snatched from a hospital room in Trois-Rivières, Quebec, by a woman allegedly “wearing scrubs and posing as a nurse who said she needed to weigh the baby,” The Associated Press reported. The alert included a photo of the suspect and a description of her car.

Four young Facebook users — identified as Charlene Plante, Marc-Andre Cote, Sharelle Bergeron and Melizanne Bergeron — were instrumental in helping to track down the suspect, police said. Bergeron reportedly showed the photo of the suspect to her friend Plante after seeing the kidnapping alert on Facebook. Plante recognized the suspect as her neighbor and the four youngsters decided to drive to the woman’s house, CTV News reported. Once they realized someone was at home, they quickly called the police.

According to the Globe and Mail, the four friends waited outside the apartment block where the suspect lived while police went inside. They were filming with a cellphone camera when an officer emerged with the baby.

“It was the best moment in my life. We were crying,” Bergeron, who posted a tear-filled video on Facebook Tuesday, told AP of the rescue.

About three hours after being snatched, the newborn was returned — unharmed — to her mother’s arms, the Globe and Mail reported. (Watch the baby being carried back to the hospital in the video above.) “Every click, every share made the difference,” the baby’s mom, Melissa McMahon,wrote Tuesday in a post on her Facebook page, per an AP translation. “Four marvelous people, whom we had the chance to meet, identified this woman thanks to Facebook … We felt a huge amount of support from the public. This victory is for you, too!!!” A woman in her early 20s has reportedly been arrested in connection with the kidnapping.

Share
Facebook
Twitter
WhatsApp
Previous articleDad Killed Daughter by Strapping Her Into Car Seat and Throwing Her Into a Stream
Next articleLoud Explosion In Kurudu, Abuja, Makes Residents Panic
- Advertisement -