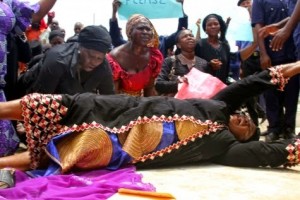 Reports yesterday by sources say that the Nigerian Police force arrested certain women that came out to join the protest for the #BringBackOurGirls campaign.
However, the Police Public Relations Officer, CSP Frank Mba has denied arresting or detaining Chibok protesters as tweeted by Mrs Oby Ezekwesili yesterday.
CSP Mba says Mrs Nyadar Naomi was only picked up for ‘interactive and fact finding interview’ and has returned home to her family.
Here’s a statement  released by CSP Frank Mba: –
“As part of measures geared towards eliciting useful information that could help security agents in the ongoing effort at finding and rescuing female students recently abducted by terrorists, suspected to be Boko-Haram, in Chibok, Borno State, Police Operatives this morning, 05/05/2014 invited one Mrs Nyadar Naomi Mutah, a native of Chibok and Deputy Director at the National Directorate of Employment, Abuja.
It was purely an interactive and fact finding interview. Mrs Nyadar cooperated with the Police in the course of the interview and was immediately allowed to return home to her loved ones. She was never arrested nor detained as being wrongly speculated in some quarters.
Meanwhile, the Police and other security agencies are leaving no stone unturned at ensuring that the abducted school children are rescued.”
CSP FRANK MBA
FORCE PUBLIC RELATIONS OFFICER,
FORCE HEADQUARTERS,
ABUJA.
AdvertisementClick Here To Join The 10,000 Naira Giveaway For 100 People!