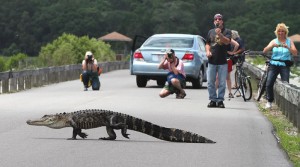 He might have gotten away with it, if he just hadn’t crashed into that alligator.

A man accused of five car thefts is behind bars after authorities apprehended him moments after he crashed into a gator crossing the road.

Calvin Rodriguez, 22, was driving around Port. St. Lucie, Florida, in a black Honda that police noticed had been reported as stolen.

Officers drove after him, but he sped away.

A short time later, Rodriguez was stopped in his tracks when he crashed the stolen car into an alligator and then careened into a median, WPTV reports.

The sequence of events still boggles the mind of detective Keith Boham.

“It’s pretty unimaginable that police officers would be at that point in time looking for these suspects and that an alligator unfortunately just happens to cross the road and assist us in catching these criminals,” Boham told MyFox8.com.

It is unknown whether the alligator survived the crash.

Investigators charged Rodriguez with five counts of grand theft auto. He is being held in the St. Lucie county jail in lieu of $37,500 bond.

Police say his alleged M.O. is to comb the parking lots of Walmart, Sam’s Club, Publix and Winn Dixie looking for Honda and Acura vehicles he can open using “shaved keys,” according to WLFX-TV.

Rodriguez allegedly confessed to the auto theft after being read his Miranda rights said he learned to steal cars “by growing up in a tough town in Connecticut,” according to The Smoking Gun.