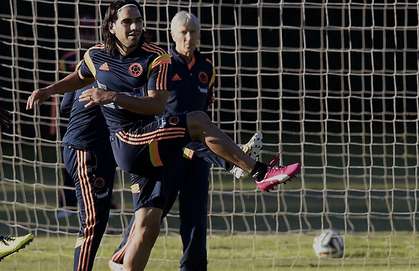 Manchester United and Chelsea transfer target Radamel Falcao has put his suitors on alert after admitting that he’d like to play in England one day.

The Colombian international was heavily linked with Chelsea before signing for Monaco last summer, but he has recently revealed that he would like to play in
the Premier League at some point in his career.

The Daily Express reports that Manchester United, Chelsea, Manchester City and Arsenal would all be fighting for his signature should Falcao become available.

“I hope to be playing for many more years in Europe and I want to play in the English league at some time,” Falcao said as reported by the Daily Express.

“I watch the Premier League and I see how competitive it is and how teams are very direct in terms of looking for the opposition’s goal.

“The football is very physical, it’s a very interesting league.”

The report claims Arsenal would be the most suitable destination, with Arsene Wenger desperate to add another striker to his squad. But Falcao would stretch
Arsenal’s transfer budget to breaking point.

Monaco signed Falcao for £50m less than 12 months ago, and the Ligue 1 club are under no financial pressure to sell. That means they’d probably be looking for £50m at a minimum to cover their cost – a fee that is £7.5m above Arsenal’s record transfer fee paid.

Manchester United and City meanwhile, have the financial resources to move for the Monaco forward, but both clubs have strong options at the position already.{GMS}