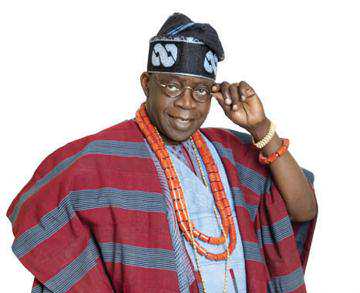 Asiwaju Bola Tinubu
Mufutau said has said that all reports about him mobilizing islamic clerics and Muslims against Tinubu were false and nothing but actions of mere evil doers, as he had no intentions of protesting against the alleged imposition of a former Accountant-General of the state, Akinwunmi Ambode, as the next governor of the state.

Speaking at his residence, Mufutau said the false reports were carried out by APC’s oppositions to cause quarrel and dispute within the party ahead the coming elections in 2015.

He also expressed his worries that claims were arising of him organizing a meeting of Muslims to arrange a protest against Tinubu when he had in fact called the meeting as a way of supporting the former governor.

He said “In fact, the first thing I did at the meeting was to call on Imams at the meeting to pray for Asiwaju Tinubu and Governor Babatunde Raji Fashola, SAN, and they obliged, praying for good health and longevity of life.

Mufutau also added that he had in fact, asked that a delegation be set up to meet with Governor Babatunde Fashola and former Governor Asiwaju Tinubu, when the issue of agitation for a Christian governor in the state came up.

“Some people are just jealous of the mutual respect and cordial relationship existing between us and they are bent on destroying it for their selfish end,” Mufutau stated.