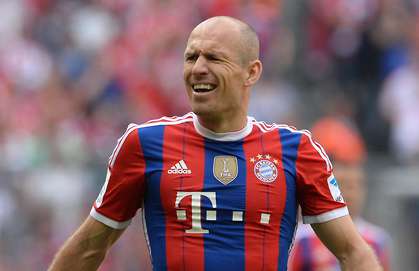 If reports are to be believed, Dutch coach Louis van Gaal – who looks set to become the club’s new manager in the near future – is desperate to bring Robben to Old Trafford in the up coming market.

Manchester United could offer the German giants as much as £25 million in order to land the winger this summer.

However, with Robben earning as much as £160,000- a-week at Bayern, it appears that the player would only sign for United if he was offered a huge pay
increase. At 30-years-old, the Dutch international is approaching the twilight years of his career and would have to make do without Champions League
football at The Theatre of Dreams.

It remains to be seen, however, as to whether Manchester United will step up their interest in the superstar in the coming weeks, but their immediate
attention will turn to appointing Van Gaal as manager.

Manchester United fans will be hoping a deal with Van Gaal can be concluded in the near future, so the club can concentrate on transfer activity.(GivemeSport)