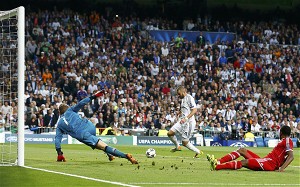 The gunners would be hoping the Spanish giants listens to their offer again, after Madrid sold the highly rated Mesut Ozil to Arsenal last summer.

Benzema has one year left on his contract, and his club are in a difficult situation whether to present a new deal to their forward, or sell.

Though, that predicament could dwindle in splits of seconds if Luis Suarez joins the club, come august transfer.

After Liverpool lost out the English Premier League title race to Manchester City, Suarez could be looking to join a new club in pursuit for a trophy, and Madrid can offer that.

Last year, Arsenal requested to sign Benzema, but his club had already sold Gonzalo Higuaín to Napoli and risked playing the whole campaign with no recognized striker. They eventually got a German shepard in the form of Mesut Ozil who has been scintillating for his new team.

However, heavy reliance on Olivier Giroud saw the striker burn out on few occasions last season. Signing Benzema could solve that headache for Arsene Wenger, who is left with raw Yaya Sanogo as second-fiddle to Giroud.