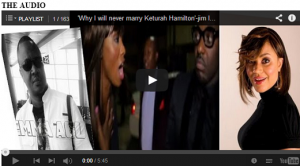 Nobody knows what Emma Agu’s personal vendetta is with Nollywod actor — Jim Iyke, but it’s pretty obvious that the blogger is out for Jim Iyke’s head.

Emma Agu seems to be having so much fun, that after leaking Jim’s audio where he said he would never marry Keturah Hamilton, his ex-girlfriend, and even said would Emma advise him to do such if he was his younger brother?, Emma finally ended the long letter with JIM MUST SETTLE DOWN NOW!

That’s not all, he also leaked his interview with Keturah and how she was so in love with Jim and how she planned to manage Jim when he eventually relocates to New York to marry her coupled with taking care of her 17-year old son.

Read everything below + audio: –

When Jim told this writer in 2011, he was relocating to US to settle down with Keturah Hamilton, I asked Keturah some hard questions:-

What is he coming to do in US? Her reply was that Jim would attend an acting class in LA, after they get married. She was getting ready to become a US Citizen then.

Question 2- How would he survive in US? She said Jim may probably get some jobs here and there.

What is your Profession? How would you sustain him, pay your bills, take care of your 17-yr old son, while Jim is attending an acting school?

Answer:- “I have some investments here and there. My son’s dad is actively involved in his life. Jim and I will get by”

keturah_hamiltonOk, as a friend, what is your profession, I have never seen any agency you modeled for? “Oh I did a couple of stuff with PDiddy, went out briefly with 50cent”

So, how did you become a super model?…”I did a commercial for Vitamin water”.

Why not get a regular job, many people are accusing you of being an escort?

“I swear on my son’s head that I am not a an escort or a stripper”. I can’t get a regular job because I was not able to finish my Secondary school . I dropped out of 9th grade when I became pregnant”.

In view of these facts babes, like I used to call her, you best bet might be to follow James to Nigeria. “Oh well, if James wants me to do that, I will definitely follow him.”

Sweet heart, how many years have you guys dated now? “Six years’. James never put a ring on your fingers? Did he ever tell you he will marry you? “Oh yes, he did say so several times”.

Did James introduce you to his parents? ” Yes he did, I spent 5 months in Nigeria”.

Did he do any traditional marriage rites with you while you were in Nigeria? ” No he didn’t”.

At the this point let me tell you the gospel truth, James will never ever marry you.) (silence) “You know what, from now on, lets talk about ourselves. let’s keep our affairs out of this”

Since I made all these remarks, Keturah Hamilton never liked my guts for telling her the truth.

Please, listen to Jim’s audio, where he referred me as his senior brother and asked if I will ever support him marrying Keturah Hamilton. Keturah Hamilton started telling me Jim Iyke has been contacting her 5 months after they broke up. I never believed her.

I knew she was capable of anything. She likes publicity and gave my company every details of her day to day activities to publish in order to remain relevant. You all recall when we published a birthday party for her dog. She sent photos she took with 76 year Old Morgan Freeman and this writer asked her what in the world she was doing with the man, her reply shocked me. She never kept her relationship with him a secret and in one of my conversations with Jim, I mentioned it to him.

There are many things time will not permit me to say here, truth be known, I was a carnival backer for Jim iyke and Nadia Buari. I was thrown completely off when Keturah told me two weeks ago that Jim was coming to her place. She said Jim’s sister who lives in London told her Jim was coming back to her.

I never believed her. She showed me proof which I cannot display to the public. I got in touch with Jim Iyke, he was in his own world. The last straw was when Keturah Hamilton said Jim has left Nadia Buari for her. Anyone in my shoes would pick up the phone to call since Jim Iyke made himself incommunicado. I was merely looking out for a man who said this writer is his senior brother.

When I wrote two lines about both Jim and Keturah coming back together, there was a question mark on it. Friends, fans and foes may not understand. Some might say as the bigger person, you would have let roll by. Some people out there would say, what is my business in all this. Who made you a judge? These twosome, got me deeply involved in this whole thing.

I have tapes where I begged to be left alone. Jim Iyke escalated the whole rift when he called me and my sons names. He kept sending emails to my P.R.O and was warned to stop, Jim sent over 7 insulting emails to me emma_aguand stopped when I instructed his emails be uploaded.

Igbos have a strong culture. We respect our elders no matter what. If your elder brother offends you, call him speak with respect, everything will be settled amicably. When you call a man you got involved into your affairs and started yelling and cursing at him, at that point, you have thrown decency into the wind.

Telling a guy you know so well started enjoying the limelight before you that he wants to get famous through you, I think it’s the height of insults any artist can take from anybody.

Those who think this was a publicity stunt, are simply ignorant and out of touch with reality. I have quietly been in the news since the 80′s. If you think a young man of my age is old, it shows how some Nigerians are dream killers. I am a musician with media power. In showbiz, anything goes. No age limit to fight dirty .

Showbiz is like politics, no permanent friends but permanent interest. Keturah Hamilton is mad right now because her game plans were shattered. Jim Iyke maybe licking his wounds because Keturah let the cat out of the box. I pray Nadia Buari comes back to Jim Iyke. There’s no perfect relationship or union. What has happened is a teachable moment. We all live to learn.

All we are saying, Jim Iyke who is almost 39-years old, the only son of two wonderful parents, must settle down now. I hail from the heartland of Africa where we admonish the younger ones when they go astray. Life is too precious to waste. You may not know what lies ahead for you to make U -turn to spend time with a woman or a man you left in a very unceremonious manner. This is America, things happen.