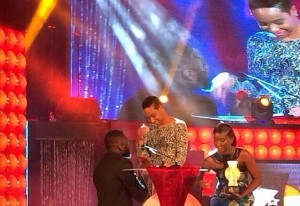 The main highlight of the Ghana Music Awards that held yesterday was the marriage proposal of Big Brother Africa The Chase Ghanaian housemate Elikem to his boo he met in the house — Pokello.

Elikem made the great gesture when the two were called up on stage to announce the winner for ‘Best Collabo of the Year’ which was won by Kwabena Kwabena and Samini, ‘Adult Music’.

Elikem had instead surprised everyone including his bride to be when he dropped on one knee and asked Pokello to be his wife.

Big congrats to them.