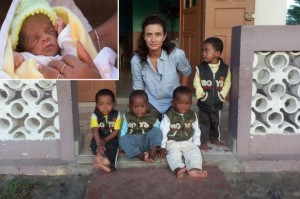 Eyes screwed up tight, she forces out a tiny weak cry as I cradle her. Weighing only 3lb, there is barely enough of this premature baby to fill the palms of my hands.

In the UK, her precarious start to life would be deemed unlucky even in the protective warmth of a UK hospital ­incubator with a loving family around her.

But here in Madagascar, an island haunted by black magic and taboos, this child’s sinister misfortune runs much deeper than that.

There is no incubator to protect her. Only a tatty mosquito net. There is no loving mum and family. Only flies circling her cot.

She is a Bad Luck Baby. Abandoned by her frightened mother simply because she was a twin – a quirk of nature seen here as a terrifying curse.

The elders of her Amtambahoaka tribe believe raising twins brings misfortune, even death, to their families.

In the past, newborn siblings were often taken out into the bush and left there to die. Today, civilisation has made some inroads into the remote south east corner of this island state off the coast of Africa.

Most end up in centres where they are put up for adoption. Many go on to start new lives in France, Italy, Sweden and Canada.

But the dark ages-old taboo out in the bush remains unbreakable. And as a mother, cradling this little victim whose sibling had already died, I want to find out how superstition can be stronger than the maternal bond to a child.

That is why I am here with Channel 4’s Unreported World TV documentary team investigating the extraordinary story of the Amtambahoaka twins.

The nurse who handed the baby to me at a fly-blown hospital in the coastal city of Mananjary tells me the child’s mother lives in a village which is a a three-hour ride away on a bumpy speedboat down the Panagalanes canal.

When we get there, the villagers tell us the young woman who had given birth to twins was already back out in the fields planting rice.

Her name is Cecile, and she is 20 years old. She looks frightened when we approach her but Cecile, her husband Adreobert and her mother agree to talk at the tiny wooden hut that is their home.

Cecile tells us that, with no ante-natal care at all, she had no idea she was carrying two babies. “When they were born I was shocked,” she says.

“And scared for her life,” her husband Adreobert cuts in. While I was trying to understand her fear, I saw a tell-tale dark patch of leaking breast-milk growing on her T-shirt.

Just talking about the tiny babies she felt forced to give away was making her body produce breast milk.

“We want to keep our twins,” Cecile’s mother tells us. “But it is up to the chiefs. If it changes we will keep our babies. But if not, we will have to keep abandoning them.”

We are determined to meet the tribal chiefs responsible so we can ask them why they promote a taboo that tears families apart. But they don’t see it that way.

At a gathering of the senior elders of the Antambahoaka, one of the oldest tells me bluntly: “Keeping twins is like eating your own s**t.”

Yet villagers are starting to rebel. On the outskirts of Mananjary, we visit seven defiant families, all with twins. They live in makeshift tents after being forced to leave their villages as outcasts.

One mum there, Carolin, must be the unluckiest woman in Madagascar – she has three sets of twins.

She says: “We had to move over 30 times before we came here, because people think that even renting us a home with twins will bring bad luck.

“Most of my family would ignore me if they saw me on the street – but nothing will ever make me give up my babies.”

Across the city there is a centre for abandoned children where more than a dozen pairs of twins are currently being given shelter. Since it opened in 1987, hundreds of twins have passed through its doors. Julie Rasoarimanana, who runs the centre, tells me not a single parent has ever returned to reclaim their children.

A few days later, back at the hospital, we discover that our surviving Bad Luck Baby’s luck has changed. She has been adopted by Juliet, a local schoolteacher from a different tribe who named her Nvayo, which means “to rise”’.

On our last day in Mananjary, we visit Nyavo in her new home, where her new mother is gently rocking her to sleep.

For this twin at least, good fortune has defeated superstition.